Fluoride Risks and how to filter Fluoride out of your water

FPIES comments in blue lower on this page.

Our kids have fewer cavities than we did, and many credit that to fluoride in the water supply.  However, most  European countries outlawed fluoride in drinking water decades ago and their dental health has improved as much as in the US, in some areas more.

The dangers may go beyond cosmetic issues. The EPA released two newer reviews of research on fluoride risks. One study found that prolonged, high intake of fluoride can increase the risk of brittle bones, fractures and crippling bone abnormalities.  The levels in most water is not high. However, water is not the only source of fluoride ingestion.

We’ve been seeing information, and heard directly from customers, saying that eczema can be caused or aggravated by exposure to fluoride.  The time may be here to filter it out of the whole house.  We have heard from many customers now that their – or their children’s – eczema worsen with exposure to fluoride in the water. Nearly always, the argument for adding fluoride to drinking water is that it is in a dosage that is safe and even good for us.  Firstly, there are studies that dispute that.  Secondly, drinking water is not the only way we ingest fluoride.  Isolating one source and saying the level is okay is absurd.  More and more the original and unproven assumption that fluoride in water would help with dental health is being confronted.

One Question we get asked often is About Reverse osmosis and whether it can FIlter Fluroide and chlorine out or not. read our article on Reverse Osmosis for more.

Fluoride is “Medicine in the Water”

Another issue is: do you really want ‘medicine’ delivered through your drinking water?  Our view is that we should each have the right to determine what medicines we intake – or don’t.  Many annual water quality reports will list a number of health issues that could be negatively impacted.

Fluoride doesn’t just break down and disappear.  It accumulates over time.  An NRDC study says people today ingest 4 times as much as they were when they started putting fluoride in our drinking water!  This is spread across intake from water, other drinks, food and dental products.  If you did everything you could think of to avoid fluoride, you wouldn’t eliminate it! 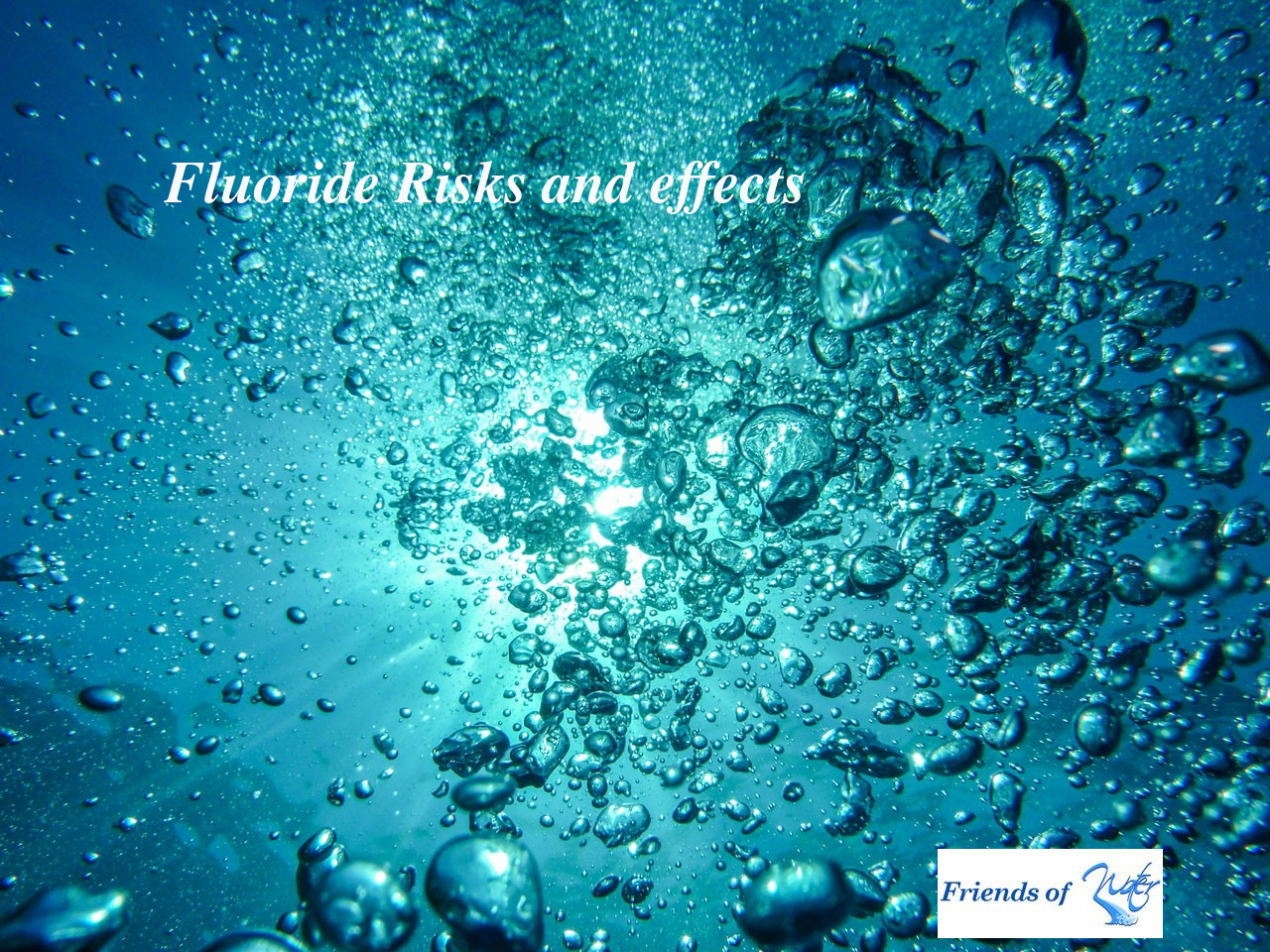 In the 1950s, the renowned allergist George Waldbott discovered that some individuals are hypersensitive to ingested fluoride. In a series of case reports and double-blind studies, Waldbott and other doctors found that relatively small doses of ingested fluoride, including the consumption of fluoridated water, could induce side effects that would quickly reverse after ceasing fluoride exposure.  Consistent with Waldbott’s research, the largest ever government-funded clinical trial of fluoride supplements reported that one percent of the children taking the 1 mg fluoride tablets  exhibited hypersensitive reactions.  Read more.

More recently, a Finnish study found that the rate of skin rashes in a city population decreased significantly within months of the city terminating its water fluoridation program.  Although the authors were generally skeptical that fluoridated water could cause harm, after the study they noted that:  “The significant decrease in the number of other skin rashes leaves room for speculation, seeming to favor the view that a small segment of the population may have some kind of intolerance to fluoride. This group of people should be studied further. The most frequently reported symptoms that disappeared from the time of actual to known discontinuation of fluoridation seemed to be itching and dryness of the skin.”
SOURCE: Lamberg M, et al. (1997). Symptoms experienced during periods of actual and supposed water fluoridation. Community Dentistry & Oral Epidemiology25(4):291-5.

Please read the top product review from a customer with thyroid issues on our kitchen fluoride filters here.  Fluoride Filter.  Please note that all the kitchen canister fluoride filters use the same fluoride media options and the same wide-spectrum filter medias.  The difference is just if you have a third cartridge and what you use it for.

We’ve heard from a naturopath and Certified GAPS Practitioner who wrote this to us:

“I see many clients with the worst of the worst health situations. They come to me because traditional medical methods do not work for them due to the synthetic nature. We support the body so the body can fix itself and see great recovery of all of them.

“We have found many discrepencies with Reverse Osmosis water, however, many clients with the most unhealthy systems come to me, specifically the children with FPIES (Food Protein-Induced Enterocolitis Syndrome – roughly stated they’re allergic to the protein in food). These clients thrive on Friends Of Water filter systems. We do not know why but I’m currently researching the cause. I have my speculations and patterns showing the reason but I need the proof so I can post it to my readers. I do know your system doesn’t change the molecular structure of water in a harmful manner while it removes the fluorine (in addition to other contaminants)- which is detrimental to their systems.

“….for example one FPIES child who is on a very strict and controlled GAPS diet did nothing else but switch to a Friends of Water filter and immediately saw massive changes. When she urinated the bathroom smelled so bad the mom nearly vomited. The speculation is once you stop putting the toxins in, specifically the fluorine, the toxins can be flushed out from your body.”

Please connect with Dr. Plotner on Facebook at The Nourishing Plot.

Friends of Water filters filter like Mother Nature does.  The contaminants are removed, healthy trace elements remain.  Please explore the Education section of our site (tab above), and Shop Kitchen Fluoride Filters.

“HARMFUL EFFECTS OF FLUORIDE  Fluoride is used as an insecticide and a roach killer. Even at the level they use to fluoridate your public water supply, usually at the rate of about 1 part fluoride for every million parts of water (1 ppm) by weight, it causes severe problems.  (Update from Friends of Water.  Levels are more frequently about .8 ppm now.)

“Dental fluorosis is one of the earlier signs of fluoride poisoning, appearing in mild cases as a chalky area on the tooth, and in more advanced cases, teeth become yellow brown or black and the tips break off.

“Fluoride in the drinking water leads to fluoride levels in tissues and organs which damage enzymes. This results in a wide range of chronic diseases. Fluoride weakens the immune system and may cause allergic type reactions including dermatitis, eczema and hives. It causes birth defects and genetic damage. Fluoride is likely to aggravate kidney disease, diabetes and hypothyroidism. The amount consumed in drinking water has been shown to lower thyroid activity in humans. It also causes the breakdown of collagen which results in wrinkling of the skin and the weakening of ligaments, tendons and muscles. There are a number of ways that fluoride can be administered. The most insidious way is through the drinking water.”

“I am appalled at the prospect of using water as a vehicle for drugs. Fluoride is a corrosive poison that will produce serious effects on a long range basis.  Any attempt to use water this way is deplorable.”
-Dr. Charles Gordon Heyd
Past President of the American Medical Association.

Some research suggests that fluoride may be good for dental health when used topically.  However, at this point it has become clear that there is no rational reason to expose yourself to it through ingestion.  There is no question that too much fluoride does irreparable damage in many ways.  Put that together with the reality that you can’t control how much fluoride you are exposed to now as you also get it through foods, drinks and some medicines.